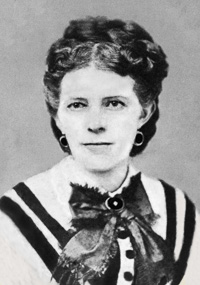 At the 1 Jun 1840 federal census, William and Amanda Stone were likely living in the Hinds County, Mississippi household of Amanda’s father, Jesse Battle Ragan (389). Although Kate’s father owned land in other parts of Mississippi, the William and Amanda Stone family, including Kate, her older brother William Ragan Stone, and her two younger brothers, all born in Mississippi, may have continued to live with Jesse B. Ragan for some period prior to Oct 1846.

As a young girl, Kate Stone as well as her older brother William R. Stone attended boarding schools at Clinton in Hinds County, Mississippi (401, 24 Mar 1863). Clinton was about six miles north of Mississippi Springs where Kate was born. In the fall of 1853, Kate Stone entered the Nashville Female Academy in Davidson County, Tennessee. Her father, William Patrick Stone, died likely of cholera or yellow fever on 6 Dec 1855 at about 41 years of age; Kate was 14 years old (541). After the death of her father, the Stone family likely resided in Warren County, Mississippi, perhaps again in the household of Kate Stone’s grandfather, Jesse Battle Ragan. Kate, however, was at school in Nashville much of the time. A Nashville newspaper notes her graduation from the Nashville Female Academy, typically a four year program, in Jun 1858 (256). 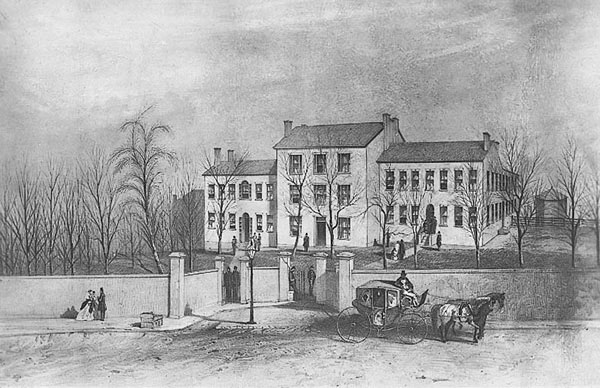 On 16 May 1859, Kate Stone’s mother, Amanda Susan (Ragan) Stone, purchased 1,280 acres of land in the Carroll Parish of Louisiana where she established the Brokenburn Plantation (391, 392). The Stone family were living at Brokenburn by 11 Jul 1860 when the federal census enumerated the household of Amanda Stone as it was at the beginning of the American Civil War (308). In addition to Amanda Stone, then 36 years old, and her children, Ashburn B. Ragan, age 16 and born in Mississippi, as well as a teacher, Albert B. Newton, age 24 and born in Mississippi, were also living in the household. Ashburn B. Ragan was Amanda Stone’s youngest brother. At the 1860 census, the Stone family received mail at both the Omega Post Office in Madison Parish, Louisiana and at the Pecan Grove Post Office in Carroll Parish.

On 26 Jan 1861, Louisiana voted to secede from the United States of America. Three months later, Kate Stone began a journal that would chronicle her experiences through the Civil War and into the period of reconstruction that followed (401). By Oct 1862, Kate’s three older brothers; William Ragan Stone, Coleman Stone, and Fredrick Walther Stone; were serving in the Confederate Army (401, 10 Apr 1863). Having taken New Orleans as well as Confederate fortifications on the Mississippi River north of Vicksburg, the Union military were pressing Vicksburg, and its actions extended into Madison and Carroll Parishes of Louisiana. With Union soldiers ransacking plantations near Brokenburn, the Stone family fled their home at about midnight on 27 Mar 1863, eventually seeking refuge in Lamar and Smith Counties of Texas. Stone family refugees included: Amanda Susan Stone; Amanda’s sister, Vansa Laura L. (Ragan) Buckner; Laura Buckner’s daughter, Beverly Buckner; Sarah Katherine “Kate” Stone, James Armstrong Stone, John Beverly Stone, and Amanda Rebecca Stone. On 9 Jun 1863, Laura Buckner and her daughter Beverly returned to Mississippi to join Laura’s husband Dr. Buckner. In route to Texas, difficulties arranging transportation delayed the family’s progress, and they paused along the way to rest and recuperate from their trials. The family arrived in Lamar County, Texas on 7 Jul 1863, about three months after leaving Brokenburn. The Stone family remained in Texas as refugees until 8 Sep 1865 when they began the journey from Tyler, Texas back to Brokenburn (401, 11 Sep 1865), arriving two months later on 11 Nov 1865 (401, 16 Nov 1865).

On 7 Mar 1866, a cutoff of the Terrapin Neck on the Mississippi River that had been predicted for more than half a century finally occurred (485, 486). The Terrapin Neck had narrowed until it was only about 30 feet wide, and the channel that the river cut across it rapidly enlarged. On 28 Mar 1866, it was reported that the little steamer Lida Norvell had come down through the new cutoff instead of taking the bend way, and her captain said he believed the new channel was now safe for all boats. Perhaps this diversion of the Mississippi River channel eventually reduced flood risk to Brokenburn, but at the time, the cutoff likely damaged levies and may have been responsible for periodic inundation at Brokenburn for some time (401, 22 Sep 1867).

After a break in the Harris levee about five miles east of Brokenburn, the Stone family again sought alternative living arrangements (401, 22 Sep 1867). They moved to Mr. Goodrich’s plantation and eventually rented part of the Wilton Plantation house. Kate Stone’s brother, William Ragan Stone, rented land from Mrs. Henderson as well as Rose Hill Plantation on the Mississippi River in Madison Parish, where Amanda Stone and the rest of the family joined him.

In Apr 1873, twin boys, William Stone Holmes and Emmet Holmes, were born to Kate and Henry Holmes in Louisiana. Emmet Holmes died in about 1878. A daughter, Amanda Julia Holmes, was born on 16 Sep 1878 also in Louisiana (408). At her daughter’s birth, Kate Holmes was 37 years old.

On 15 Mar 1902, the United Daughters of the Confederacy admitted Kate Stone Holmes as a charter member of the Madison Infantry Chapter, Louisiana Division (402, 512). Mrs. Kate S. Holmes, Mrs. Amanda R. Stone, and Miss Amy J. Holmes are listed as charter members of the United Daughters of the Confederacy, Madison Infantry Chapter #561, Tallulah, Louisiana.  The charter is dated 15 Mar 1902. (From records of Hermione Museum, Tallulah, Louisiana, 27 May 2002).

In Nov 1900, Kate Stone Holmes began transcribing her journal pages from the Civil War era into bound volumes (401). She signed the first volume on 12 Jul 1907. 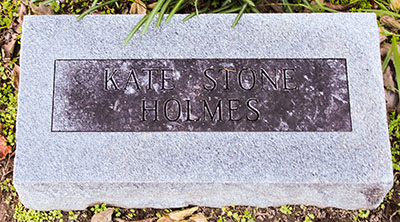 Located approximately 30 miles east of Vicksburg, Mississippi, Hinds County was acquired from the Choctaw Indians in Oct 1820. Mississippi Springs was located about four miles east of the present-day county seat at Raymond and 11 miles southwest of the state capital at Jackson.

Kate Stone wrote about news of the Terrapin Neck cutoff on 1 Feb 1865, suggesting that it would place Brokenburn and neighboring plantations above possible overflow (401, 1 Feb 1865).

The 1880 federal census of Madison Parish, Louisiana records the birthplace of Kate Stone’s father as Virginia; most other sources list his birthplace as Tennessee. The 1880 census enumerates William Stone Holmes as Willie S. Holmes and Amanda Julia Holmes as A. J. Holmes.

Kate Stone’s date of birth as 8 Jan 1841 is as stated in her own handwriting on a petition to join the United Daughters of the Confederacy (402). This date of birth is consistent with the 1850 federal census that recorded her as nine years old. But inconsistencies with the census begin with the 1860 enumeration of the Amanda Stone household on 11 Jul 1860, recording Sarah K. Stone as age 18 years. If Kate was born on 8 Jan 1841, then she was 19 and 1/2 years of age at the 1860 census. As the census progressed, Kate aged more slowly. At the 1870 census, she was 29 and 1/2 years old; the census enumerates her as age 25 years. At the 1880 federal census, Kate and Henry Holmes were living at Delta in Madison Parish, Louisiana. The census enumerates her as 32 years old; she was over 39 years of age. The 1900 census is more consistent with the best documented date of Kate Stone’s birth. At the census on 17 Jun 1900, Kate Stone was 59 years and 5 months old. The census enumerates her as age 58 years. Sarah Katherine Stone died on 28 Dec 1907 at age 66 years and 11 months.

The 1900 federal census of Madison Parish, Louisiana enumerates Kate Stone Holmes as born in Jan 1842, and as age 31 at the time of the census. Additionally, the 1900 census records Kate S. Holmes father as born in Mississippi and her mother as born in Virginia. The census reversed the birthplaces of her father and mother. Elsewhere, Kate Stone stated her date of birth as 8 Jan 1841 (402).