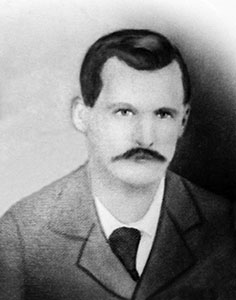 Fredrick Glonar Countryman was born on 22 Jul 1866 at Ovid in Seneca County, New York (781, 782, 788). He was the second child born to George Washington Countryman and Amelia Alice (Kniseley) Countryman. At Fred Countryman’s birth, his father was 27 years old, and his mother was 21. Fred Countryman’s mother Amelia was a daughter of Elijah M. Kniseley and Abby Jane (Benjamin) Kniseley (771).

In May of 1876, the George Washington Countryman family migrated from Seneca County, New York to Larned in Pawnee County, Kansas, arriving by excursion train on 10 May 1876 (760, 783). Fred Countryman was nine years old. George W. Countryman’s mother, Abby Jane (Benjamin) Kniseley, accompanied the family to Kansas. Fred Countryman’s father, George Countryman, went to Kansas a year ahead of the family. Fred Countryman would later explain that his father came to Kansas to find work as a brick mason and to acquire land near the developing railroads (760).

At about 12 years of age, Fred Countryman began herding cattle on the Bartlett and Badger Ranch in Edwards County, Kansas (760). Edwards County was adjacent to Pawnee County on the south, and the George W. Countryman family lived near the county line.

Fred Countryman worked on the Bartlett and Badger Ranch until 1887 when he entered an apprenticeship to a blacksmith at Great Bend in Barton County, Kansas, about 22 miles northeast of Larned (760). He ran in the Oklahoma land race of 1889 and staked a claim at the current location of Dover in Kingfisher County, Oklahoma. Later, he explained that there was a “little dispute about who the place belonged to,” so he sold to the other party and returned to Great Bend, Kansas, where he stayed until about 1891 (760).

Fred Countryman retired as a blacksmith in 1943, but maintained a shop behind his home in Fairview, Oklahoma where his oldest son, George Washington Countryman continued the trade.

Fredrick Glonar Countryman died on 11 Nov 1948 of injuries he incurred during an assault and robbery at his blacksmith shop behind his home in Fairview, Oklahoma (782, 786, 788). His remains are buried in Lot 18, Block B in Fairview Cemetery, Major County, Oklahoma (786).

The 1895 Kansas state census on 1 Mar 1895 enumerates Fred G. Countryman as 28 years old and born in New York (785). Apparently two other persons with the surname Countryman were living in the same household; however, the census only recorded their initials. Fred G. Countryman did not marry Maude Ellen Countryman until 16 Feb 1896. The other household members are more likely his siblings. A three year old male may have been a child of a 22 year old female with first initial F.

It was out in the jungles, called Midway - just a section house, in the middle of a 17,000 acre cattle ranch. The Pacific Railway leaves Wichita and at that time connected with the main line of the Missouri-Pacific that went through Geneseo, and they wanted to extend it to Kanapolis and went right through those hills and in order to do that they had              and the ranchman specified what it was to be in the way of a depot and they put that depot there and called it Midway, just half way between Genoseo and Kanapolis and stationed a section boss there, and it went both way, down to Genoseo and up to Kanapolis.

Woods County, Oklahoma was created within the Oklahoma Territory from part of the Cherokee Outlet on 16 Sep 1893. Alfalfa and Major Counties were created from parts of Woods County on 16 Nov 1907. Township 27 North of Range 9 West of the Indian Meridian was within that part of Woods County that became Alfalfa County.