Probate of the Estate of William Scott of Bayou Pierre

To the Honorable the Orphans Court of Claiborne County.

We three of the Commissioners duly appointed by Said Court for the purpose of dividing the real and personal estate of William Scott (of Bayou Pierre) deceased would respectfully represent That in obedience to Said order we carefully examined the real Estate having in view a subdivision of the Same and were impressed with a belief that the land could not be divided to the mutual advantage of all the heirs interested we therefore proceeded to lay off the dower in the Same agreeably to our idea of the law and of justice, and with distinct impartiality to the best of our Skill and judgement as will be exhibited and made fully appear by the accompanying plat of a Survey made by William Davis County Surveyor under our immediate inspection and direction in conformity to the usual mode of proceeding upon an order of the Said nature. We have likewise proceeded to divide the Negroes belonging to Said estate among the several Heirs according to law by apportioning the said Negroes into Six Equal Shares or Lots as to value and usefulness as near as circumstances would permit, the personal property of every description (excepting the Negoes) being exempted from a division by an order from your Honorable Court authorizing a sale thereof on the 29th inst. it being understood among the several heirs and Guardians that the the negroes are not to be removed previous to the present crops being gathered and carried to the Gin unless by consent of all parties interested, and it being further understood that a Negro Woman named Fanny belonging to Lot No 5 drawn by Jeremiah Watson, Jr. as Guardian of Robert Scott the Said Negro woman being at the time in a low state of health and her situation in some degree doubtful, valued four hundred and twenty-five dollars that in the event of her death by her recent illness each other heir will pay to Robert Scott one sixth part of her appraisement which division of Negroes is as shown below, number 5 drawn by Jeremiah Watson, Jr. as Guardian of Robert Scott pays to number 2 drawn by _____ Watson Guardian of Agnes Scott fifty dollars Lot 6 drawn by Thomas Freeland Guardian of William Scott pays to Lott 4 drawn by David G. Scott fifty dollars, Lott No 3 drawn by William Briscoe on account of Mrs. Briscoe fifty dollars.

Sworn to and subscribed this 12 day of Dec. 1827
Thomas Freeland (seal) 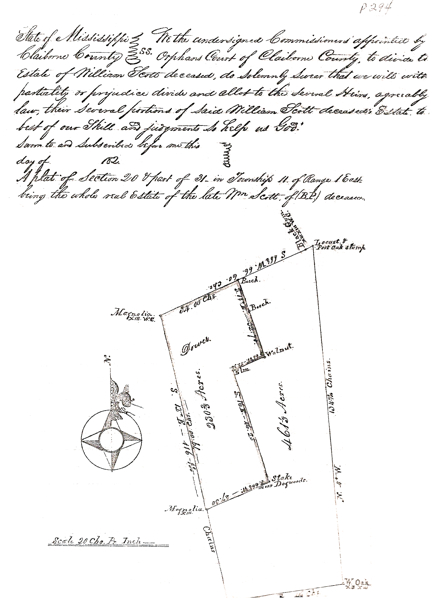