Will of David Emanuel, Sr. 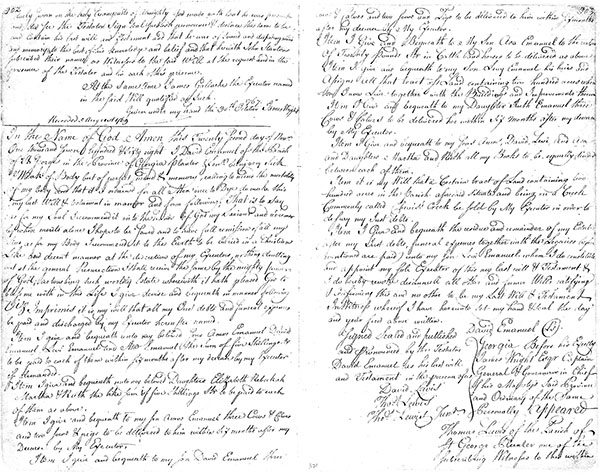 In the Name of God. Amen. This Twenty Second day of Nov. One Thousand seven hundred Sixty eight. I David Emanuel of the Parish of St. George in the Province of Georgia planter gentleman being very sick & Weak of Body but of perfect mind & memory, calling to mind the mortality of my body and that it is ordained for all Men once to Dye do make this my last Will & testament in manner and form following: That is to say as for my Soul I commend it into the hands of God my Savior and redeemer by whose merits alone I hope to be Saved and to have full redemption of all my Sins as for my Body I commend it to the Earth to be buried in a Christian Like and decent manner at the discretion of my Executors, nothing doubting but at the general Resurrection I shall receive the same by the mighty powers of God; as touching such worldly Estate wherewith it hath pleased God to bless me with in this Life I give devise and bequeath in manner following

Viz. Imprimis it is my will that all my Just debts and funeral expenses be paid and discharged by my Executor hereafter named.

Item I give and bequeath unto my beloved Sons Amos Emanuel David Emanuel Levi Emanuel and Asa Emanuel the Sum of five Shillings Str to be paid to each of them within six months after my decease by my Executor if demanded.

Item I give and bequeath unto my beloved Daughters Elizabeth Rebeckah Martha & Ruth the like sum of five shillings Str to be paid to each of them as above.

Item I give and bequeath to my Son Amos Emanuel three cows & calves and two sows and pigs to be delivered to him within six months after my decease by My Executor.

Item I give and bequeath to my Son David Emanuel three cows & calves and two sows and Pigs to be delivered to him within six months after my decease by My Executor.

Item I Give and bequeath to my Daughter Ruth Emanuel three Cows & calves to be delivered her within six months after my decease by My Executor.

Item I Give and bequeath to my Sons Amos, David, Levi, and Asa and Daughters Martha and Ruth all my Books to be equally divided between each of them.

Item it is my Will that a Certain tract of Land containing two hundred acres in the Parish aforesaid situated and being in a Creek Commonly called Cheviss Creek be sold by My Executor in order to defray my Just debts.

Item I Give and bequeath the residue and remainder of my Estate after my Just debts, funeral expenses together with the Legacies before mentioned are paid unto my Son Levi Emanuel whom I do constitute and appoint my Sole Executor of this my last will & Testament & I do hereby revoke disanull all other former Wills ratifying & confirming this and no other to be my Last Will & Testament. In witness whereof I have hereunto set my hand & Seal this day and Year first above written.

Georgia Before his Excelly James Wright Esqr Captain General & Governor in Chief of his Majesty's Said Province and Ordinary of the Same Personally appeared Thomas Lewis of the Parish of St George Planter one of the subscribing Witnesses to this will written last Will and Testament of David Emanuel of the same Parish Planter deceased who being duly Sworn on the hold Evangelists of Almighty God made oath that he was present and did see the said Testor sign Seal publish pronounce & declare the same to be & contain his last will & Testament and that was of Sound & disposing mind and memory to the best of his knowledge and belief and that he with David Lewis and Thomas Lewis the Younger subscribed their names to the said will at the request and in the presence of the said Testor and in each other's presence.

At the Same time Levi Emanuel the Executor named in the said Will Qualified as Such. Given under my hand this 6th March 1769

Transcribed by Peggy Carter Price, Littleton, Colorado, USA from a photocopy of the original. Original spelling and punctuation in the original are retained. Source: St. George's Parish, Georgia Will Gook A 1754–1772, Pages 3–4.