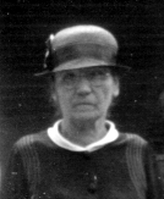 John Griffith, father of Granddad Griffith. I never did see Dad's father nor mother. Dad was 7 weeks old when his father died. He went out in the woods to chop wood and a tree fell on him and killed him. Grandmother went to hunt him and found him where a tree had fallen on him. He was getting pretty old. Grandfather Griffith was the baby of the family. There were 13 children. I think Dad only had two sisters and the rest were boys. Mary Jane and Priscilla. Homesville, Ohio - they lived in a village by Homesville. He went out to cut wood. He was a carpenter. Granddad had some brothers in the Civil War - two or three. Uncle Will and Uncle Jim; and Dan got killed in the Civil War. Will and Jim were wounded. They were in the Union Army. His father died before the Civil War. Uncle Sile was not old enough to serve in the Civil War. 1853, Grandfather Griffith born at Homesville, Ohio. Lived there until about 23 years old and came to Kansas. Grandfather was Scotch-Irish and Welsh.

Grandmother's people lived in Homesville, Ohio. Granddad was a farmer - they lived on a farm. Grandpa wore a beard. They had a big farm, a good farm. They made all their syrup, had maple trees, and everything like that.

Grandmother and Grandfather married at Homesville. Dad was 21 and Grandmother about 18. They lived at Homesville about 3 years. Granddad Livingston and Grandma came and wanted them to come with them and they took a claim just west of Granddad's place. They never did prove it up but they lived there. They almost proved it up.

I was born in a dugout, with only part of a roof, and it was snowing. They put a blanket over the corner of the house. It was just a sod shack.

They came in 1869 to Kansas. They came in the summer. They took a claim, but in the winter, they chopped wood for a living. It was about 15 miles southeast of Ellsworth. Kansas at that time was open territory and prairie. It had some springs on it.

Grandmother Livingston died back at the same place, Homesville, after I was born. She never did get to come to Kansas. None of them went back to the funeral. They were all back there except Dad. Uncle Lige came a couple of years later and visited.

Grandmother Livingston died at Cache, Oklahoma. Grandmother died at Aunt Ella's about a mile out of Cache.

Grandmother and Grandfather Griffith lived around Ellsworth until 1900 they came to Reeding Oklahoma and farmed.

Mama born at Ellsworth, February 25, 1878. Lived on a farm south and east of Ellsworth (different farms from time to time). I was working in a Section House; I was a cook. I was 16 years old, and Dad came and talked - came in with an old pair of horses and a covered wagon and team of horses to work on the Section.

Source: In about 1940, Fannie Lee Emanuel (Countryman) interviewed her mother, Maude Ellen Countryman (Griffith) at Fairview in Major County, Oklahoma, USA in order to learn about her ancestors and family history. Maude Ellen Countryman was about 61 years of age. Mrs. Emanuel recorded her mother's narrative in Gregg Shorthand and later transcribed her shorthand into a typescript. That original typescript survives and on 4 Apr 2013 is in the possession of William Robert Emanuel, Falls Church, Virginia, USA. William Emanuel transcribed this version of the narrative from the typescript.