Moses Tucker Emanuel was born in Talbot County, Georgia in about 1852. He was a son of Benjamin Thomas Emanuel and Amazon Jane Emanuel (Johnson). Amazon Jane Johnson was a daughter of Elijah Johnson and Sarah Jane Johnson (Collins), and Moses Emanuel likely was named after Moses W. Johnson, a brother of Amazon Jane. Moses Emanuel was the youngest of eight children of Benjamin and Amazon Jane Emanuel. He was a great-grandson of David Emanuel, Jr., a patriot during the American Revolution who served as Governor of Georgia for a period in 1801. Emanuel County, Georgia is named in his honor.

By 1870, Moses T. Emanuel was a student at the University of Virginia at Charlottesville in Albemarle County, Virginia. The 1870-1871 catalog of students lists Moses Emanuel attending the Schools of Chemistry and Pharmacy, Medicine, Physiology and Surgery, Anatomy and Materia Medica during the first session.

During the period of reconstruction following the American Civil War, the Emanuel family sold plantation property in Talbot County, Georgia to pay debt and taxes and to separate from a failing enterprise. Amazon Jane Emanuel and her oldest son, William David Emanuel, migrated from Talbot County to Texas in about 1877. Amazon Jane Emanuel died in Cherokee County, Texas on 1 Aug 1877. Before Jun 1880, Moses Tucker Emanuel migrated to Parker County, Texas. The 23 Jun 1880 Federal Census of Weatherford in Parker County, Texas enumerates M. T. Emanuel, age 27 years and single, working as a physician.

On 1 Dec 1880, Moses Tucker Emanuel and Annie Eulia Persons married in Talbot County, Georgia. Annie Persons may have been a daughter of Robert A. Persons, born in Georgia in about 1831.

Moses Tucker Emanuel died in Jul 1897, at Weatherford in Parker County, Texas, before his funeral at the First Presbyterian Church on 16 Jul 1897. At his death, Moses Emanuel was about 45 years of age. 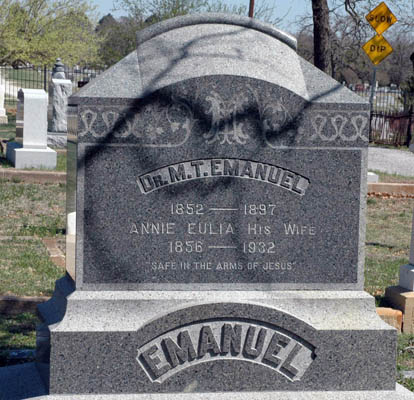 Anecdotal information suggests that Amazon Jane Emanuel, mother of Moses Tucker Emanuel, may have been a physician.