By age 20, William D. Emanuel was a student, at Mercer University at Penfield in Greene County, Georgia. Billington Sanders served as President of Mercer University from 1833 to 1850, and many students lived in the home of Billington and Cynthia Holliday Sanders. The 1850 federal census of Greene County enumerates the Sanders home including Wm. Emanuel, age 20 years, as a student (352). According to a Catalogue of the Officers and Students of Franklin College, University of Georgia for the school year 1850-1851, William D. Emanuel of Talbot County was a student in the University’s sophomore class (340).

The 1856 tax list for the Wilkerson District of Talbot County, Georgia includes William Emanuel as administrator of the Estate of Benjamin T. Emanuel for 250 acres of land in Early County, Georgia worth $250 (359).

During the American Civil War, William David Emanuel served with Company I of the 46th Regiment, Georgia Volunteer Infantry, known as the Talbot Grenadiers or Talbot Volunteers (346, 347). William Emanuel was inducted into the Confederate army on 4 Mar 1862 with the rank of Private and appointed Ordinance Sergeant on 10 Dec 1863. He surrendered at Greensboro, North Carolina on 26 Apr 1865.

William D. Emanuel’s wife, Catherine P. (Brown) Emanuel died on 28 Apr 1866, 56 days after the birth of her oldest child Lillian, suggesting that Catherine may have died from complications in childbirth (204). 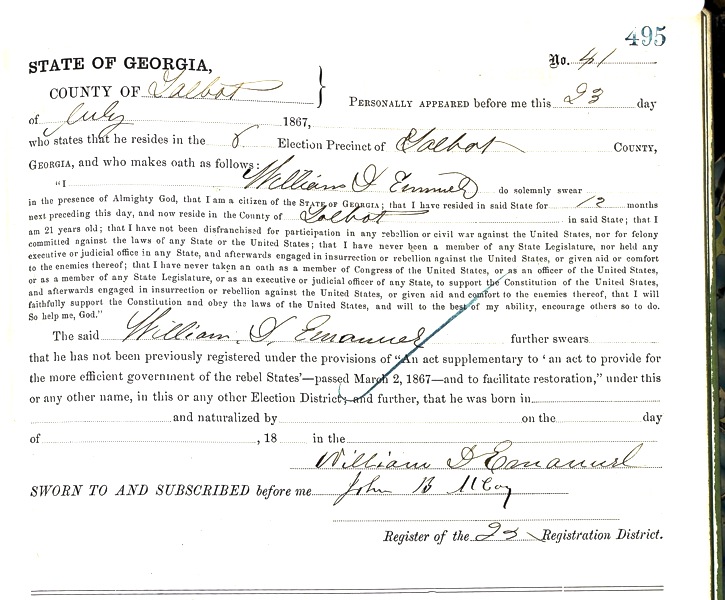 On 23 Jul 1867, William D. Emanuel signed a State of Georgia Reconstruction Oath and registered to vote in the Wilkinson District of Talbot County, Georgia (345).

At the 17 Jun 1870 federal census of the Wilkinson District of Talbot County, Georgia, with the exception of Ida C. Emanuel, all children of William D. Emanuel and Catherine P. Brown, were living with their father in the Amazon Emanuel household (354). Also living in the household were a school teacher, Mary Williams, age 33 years, as well as two boarders, Sarah Clark, age 20, and Frances Clark, age 16 years. All members of the Amazon Jane Emanuel household were born in Georgia. The 1870 census records Amazon J. Emanuel as 60 years of age and keeping house. She held real estate valued at $3,000 and personal property valued at $600. William David Emanuel was 39 years of age, a farmer, with personal property valued at $800. Presumably, E. E. (O’Neal) Emanuel, the second wife of William David Emanuel, died or the couple otherwise separated before 17 Jun 1870.

On 30 May 1872, William David Emanuel and Mrs. Mattie (George) Gordy married in Talbot County, Georgia (358). Rev. Simeon Maxwell presided over the ceremony. Talbot County, Georgia records list the marriage date as 27 May 1872, while the date is recorded in the Bible of William David Emanuel as 30 May 1872. The license was likely issued on 27 May 1872, and the wedding ceremony occurred on 30 May 1872. Prior to her first marriage, Mrs. Mattie Gordy was Martha Susan George, a daughter of Mark Alexander George and Jane Boswell (Dennis) George. By 1870 the George family was living in Talbot County. Mrs. Mattie Gordy was married previously to Gilbert P. Gordy, who died on 4 Oct 1864 of wounds incurred while serving in the Confederate Army.

Through the Civil War, Mercer University graduated its first class in 1841 and continued to operate at Penfield in Greene County, Georgia. Following the war, the University moved to Macon Georgia.