Michael John Griffith was born on 30 Aug 1853 in Holmes County, Ohio (165, 547, 548). He was the youngest child of Benjamin Griffith and Mary (Hites) Griffith. Both parents of Michael were born in Pennsylvania. According to recollections by Maude Ellen (Griffith) Countryman, a daughter of Michael Griffith, Benjamin Griffith died on about 20 Oct 1853 in a tree felling accident when Michael was seven weeks of age (560).

On 1 Jul 1870, the federal census of Holmesville, Holmes County, Ohio enumerates the household of Mary (Hites) Griffith, age 68 years and born in Pennsylvania (561). Children of Mary Griffith living in her household were James, age 26 years; Elijah, age 27; Daniel, age 30; Letitia, age 24; Silas, age 19; and Michael Griffith, age 16 years. James and Daniel were working as day laborers, and Elijah was working on a farm.

On 6 Nov 1878, Michael Griffith’s mother, Mary (Hites) Griffith died in Holmes County, Ohio at about 76 years of age. Within a year following her death, Michael and Agnes Griffith migrated to Ellsworth County, Kansas as pioneers on the great plains. On 25 Feb 1879, their first child, Maude Ellen Griffith, was born at Geneseo in Rice County, Kansas (165). Maude would later recall:

I was born in a dugout, with only part of a roof, and it was snowing. They put a blanket over the corner of the house. It was just a sod shack.

At the 29 Apr 1910 federal census of Cement in Canadian County, Oklahoma, Michael J. Griffith was 57 years old and his wife, Agnes L. (Livingston) Griffith was 48 (1038). Michael and Agnes as well as their parents were all born in Ohio. Four children of Michael and Agnes Griffith were living in their parents’ household: 18 year-old Pearl M. Griffith; Truman A Griffith, 16 years old; James M. Griffith, 13; and 11 year-old Arthur R. Griffith. All children were born in Kansas.

The 1930 federal census of El Reno in Canadian County, Oklahoma enumerates Michael Griffith as 76 years old and his 69 year-old wife A. L. Griffith (1040). At their marriage, Michael was 28 years old, and Agnes was 17. Michael Griffith held real estate valued at $500.

Michael John Griffith died of Apoplexy, likely a stroke associated with hypertension and arteriosclerosis, at El Reno in Canadian County, Oklahoma (548). A funeral service with Reverend R. R. Hildebrand presiding was held at the Christian Church in El Reno. Michael John Griffith is buried in Enid Cemetery at Enid in Garfield County, Oklahoma (663). 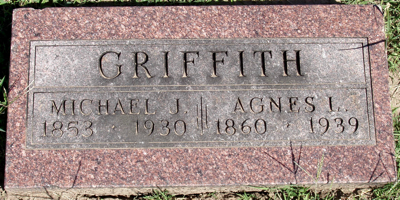 At the1860 federal census of Holmes County, Ohio, Mary Griffith and son Michael were living adjacent to the George C. Griffith household. George Griffith was an inn keeper, presumably at this location.

At the 1900 federal census of the Mitchell Township of Rice County, Kansas, Mary Jane Griffith, also known as Lizzie M. Griffith, was living in the household of a Mr. Cline and his wife Ella Cline on property adjacent to that occupied by the Michael Griffith household. Mary Jane Griffith, enumerated as Lizzie M. Griffith, was age 14 years and born in May 1886 in Kansas. Both of her parents were born in Ohio, and she worked as a servant doing house work.